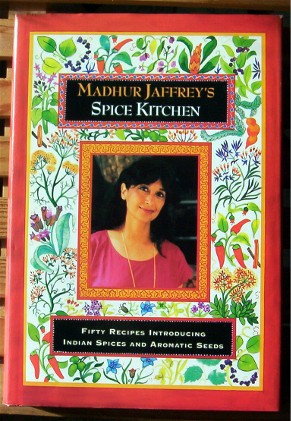 This little book is a powerhouse of Indian cooking. It’s small, it doesn’t lie flat, it has no pictures (except a few line drawings), and it’s far from comprehensive, but this one book revolutionized Indian food for us. Not right away, though.

It was a gift from a friend many years ago, after I had already given J a copy of Yamuna Devi’s Art of Indian Vegetarian Cooking

, and we felt (rather smugly) that we had everything we needed for cooking Indian food. But if you’ve ever used the Devi book, you may have noticed that her ingredient lists are enormous, her instructions are tiresomely exact, and she puts a somewhat intimidating weight on the history and context of the food. We had the book, but I mostly used it to make flatbread and hot yogurt drinks to go with our Patak’s Curry Paste concoctions. Spice Kitchen sat on our shelf, unappreciated.

Then one day we opened it. I don’t remember what the first recipe we tried might have been: the Peshawari Kebabs, or the Delectable Pork? Or Prawns in a Creamy Aromatic Sauce, or possibly just the Aromatic Lentils? It doesn’t matter. Every recipe we’ve made out of that book has been a perfect representation about a particular flavor, spice or cooking method from Indian cuisine. We’ve adjusted a few things here and there – I don’t much like using thin-cut pork chops for the tamarind pork, as instructed. The grilled leg of lamb is wonderful, but I think it was even better done as kebabs. I love green peas instead of shrimp in the tomato-cream sauce for a fantastic side dish. And Ms. Jaffrey has a very funny idea of the difference between jalapeños and serranos (jalapeños are not hotter, at least not around here).

We have since added quite a number of Indian cookbooks to our increasingly large collection, including books by Meena Pathak, Julie Sahni, Vikram Vij, and other Madhur Jaffrey works. We use them, too. But every couple of weeks out comes the little red book!

This recipe is a favorite of ours, made either with green beans or fresh asparagus. Ajwain seed can be found at Indian groceries – it’s rather like thyme in flavor. Amchoor is green mango powder, and it’s awesome – it makes a yummy tart gravy when it’s added with water.

Bring a large pot of salted water to a boil and drop in the beans. Boil just until cooked, then drain.