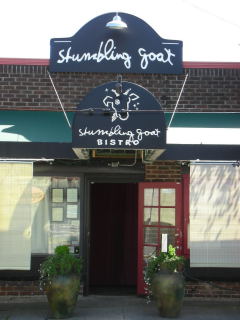 We were in Seattle on an errand on Saturday (after our precinct caucus – 80 people showed up!), and decided to treat ourselves to dinner at an especially comforting place, the Stumbling Goat on Phinney Ridge. We’ve been here twice before and had a nice time, but it had been awhile.

The ambience of this place is fantastic at night, with deep red curtains draped artfully around the room, soft lighting and a happy buzz of conversation that manages to never become obtrusive. We came in on the early side but felt lucky to get a table; the other tables filled up quickly after we arrived. Service was attentive and friendly but not overly familiar. I was impressed at the enthusiasm shown by the hostess, our waitress and the sommelier – they gave the impression that it was really, really important to them that we have a wonderful dinner.

We began with cocktails: J got something called a Billy Goat, which was basically a gin and tonic with extra citrus – very refreshing. I had lillet on the rocks with an orange twist, something I’ve been meaning to try and had never gotten around to. I do believe I’m a convert! While we finished our drinks we shared a plate of roasted beets, lettuce, apples and stinky cheese. It was nice – very fresh tasting and light. We figured that was a good idea given what we had ordered for our entrees.

The menu at the Stumbling Goat is the sort I like best: constantly changing with the seasons and what’s available from local providers. They always seem to have some version of their roasted chicken (which I had last time we were here – yum), but you never know exactly what will be on offer. The menu this week looked very promising, but we were both enamoured of the night’s specials: a pasta dish with Wagyu beef Bolognese, and lamb chops with crispy potatoes and watercress. In fact, as the waitress was describing the lamb, J was thinking, “That sounds really good! I think I’ll get it!” until she mentioned the crispy potatoes, when he then thought, “Oh. Jessamyn’s going to get that. I better get something else.” He knows me well.

So it was a little disappointing when my lamb came and the potatoes turned out not to be crispy at all, instead being tender and deeply flavored with thyme and lemon. I decided I could live with it, especially after I tasted the lamb. J’s pasta, on the other hand, was one of the most divine things we’ve ever tasted. It was what Bolognese sauce would taste like in heaven. The pieces of pancetta were enormous and nearly melted in the mouth. My word.

We were pleased with our wine, as well – the sommelier came over to give us a hand while we were waiting for our entrees, and eventually suggested a very reasonably priced South African pinotage. We have recently become big fans of pinotage, and this was a really nice one – instead of the barnyard “funk” that so many of them have (which I quite like), this one had a clean smoke flavor and a medium body that suited both my lamb and J’s pasta extremely well.

We finished with coffee (the restaurant doesn’t do espresso, but the drip coffee is excellent) and headed out feeling pampered and very well fed. I suspect we’ll be back again before too long.