As some of you may know, I play in an Irish band with J and my parents. Because of that, Saint Patrick’s Day tends to be a bit fraught for us, trying to cram in several performances during the prime “season.” This year we played two concerts, one in Wenatchee and one in Kennewick. Lots of driving, but the weather was clear and, as we usually do when we head out to the Tri-Cities area, we made the most of the chance to visit some of the many, many wineries along the way.

Food-wise, we started out well. The morning after our gig in Wenatchee we drove over Blewett Pass to Ellensburg, home of one of our favorite casual restaurants of all time, the Valley Cafe. The Valley’s been around for ages – my parents took me there when I was a kid – and J and I had the good fortune to live four blocks away from it for two years. Sigh…

Anyway, the Valley continues to be a great place. They specialize in sort of elegant but gooey Italian bistro food, particularly pastas, and they usually have some interesting meat or seafood specials going, and their wine list features loads of the local wineries. I find it a deeply comforting place to eat, but that’s partly because I remember what good care the waitstaff took of me when I would wander over there for lunch on my work break.

On this occasion, I was wanting vegetables, so I ordered a half-size spinach salad and a cup of cream of mushroom soup. J ordered the lasagna special, which was an odd but successful combination of butternut squash, cashews and artichoke hearts, and very very gooey indeed. My father got the pastrami sandwich and my mother had a cup of beef burgundy-style stew. All perfectly good and extremely filling.

After lunch we made one other very special stop – the Winegar’s Dairy drive-thru. We used to buy our milk from Winegar’s when we lived here, but now we have to content ourselves with the occasional milkshake – I’m convinced that Winegar’s makes one of the best espresso milkshakes in the whole world. 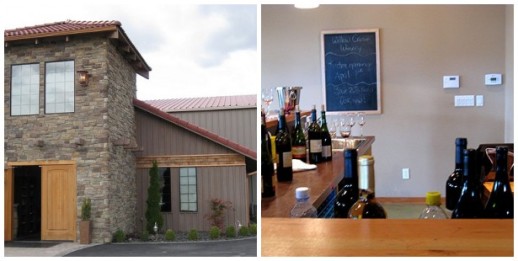 On to the Yakima Valley and Prosser! We didn’t have a lot of time, so we narrowed our winery list. We stopped in Prosser in the weird wine/industrial park that’s sprung up on the edge of town, and checked in at Thurston Wolfe’s tasting room, followed by Willow Crest’s. We really like the wines made by these two, particularly the Willow Crest Cabernet Franc, which I think is the ultimate wine to go with grilled food, deep and rich with a definite edge of char. We bought several bottles of the 2005 vintage.

Next we headed for Red Mountain, just outside Benton City. It’s a separate appellation from the surrounding area, having very distinct growing conditions, and many wineries in other locations grow their grapes here. We’ve hardly scratched the surface of the possibilities, since Red Mountain includes Hedges, Tapteil, Hightower, Mercer and Kiona, among others. Last year we discovered Sandhill Winery, so we decided to go back there and also check out Seth Ryan just down the road.

About Seth Ryan…I know one of the winemakers died suddenly not long ago, and it hasn’t been an easy year for them. We had always heard really good things about their wine. But the wine we tasted there just wasn’t very good. They were mostly 1999 vintages, and had a strange, overfermented taste to them. The Gewurztraminer was fine, though.

Sandhill, though. They make a basic red table wine called Cinnamon Teal (after the bird), and it is a total steal at $10. Their Pinot Gris is incredibly crisp and refreshing. And their straight Cabernet Sauvignon and Merlot are simply astonishing. Plus I love that their tasting room is tucked into one end of their warehouse – no pseudo-Tuscan decor, no doilies, no goofy wine paraphernalia. Just casks, boxes and forklifts – a working winery.

After Sandhill, we headed on to Kennewick. Sadly, I find Kennewick so hard to negotiate that we didn’t succeed in going out for anything except a Jack in the Box chicken sandwich and a Starbucks latte. Maybe next time…

Finally, back in Wenatchee, starving and tired, we fueled back up on pizza, burgers and ribs at McGlinn’s Public House, accompanied by my favorite IPA. It was absolutely perfect.

2 thoughts on “to Kennewick and back”