Despite having a kitchen in Paris, we still ate out most of the time. We would have breakfast in the apartment, then venture out to some new part of the city to explore and have lunch. In the afternoon we might rest, have a drink in a cafe, or wander around our local neighborhood, then head to dinner around 9 pm along with most of the locals.

As I mentioned in an earlier post, I had done a ton of research on Paris restaurants, and to some extent it really wasn’t necessary. Once there, we were much more interested in finding something that looked good wherever we happened to be, rather than going out of our way to go eat at a particular place.  We may have missed out on some great food, but nothing beats a relaxing stroll home after dinner without having to get near a cab or the metro, plus the fun of discovering a great place on our own.

Here are some restaurant dishes we particularly enjoyed:

Sea bass and risotto at Les Cotelettes. We went to this restaurant twice because we liked it so much – the food was somewhere between traditional French and Italian, with a varying menu based on seasonal ingredients, and the staff was very kind to us. They used old dishtowels for napkins and cool retro dishes, and the wine list was wonderful.

The first time I got the bass and risotto it was adorned with paper thin slices of very fresh zucchini. When Jon ordered it the following week it was full of chanterelles. Both were delicious, and the risotto was nicely al dente and not at all soupy.

Also at Les Cotelettes: a chilled zucchini soup. I wasn’t expecting much from this, but it sounded light and refreshing on a hot evening. It was richer than it looked, with a peppery green flavor, and had little chunks of feta on top. I would have licked out the bowl if I’d dared. 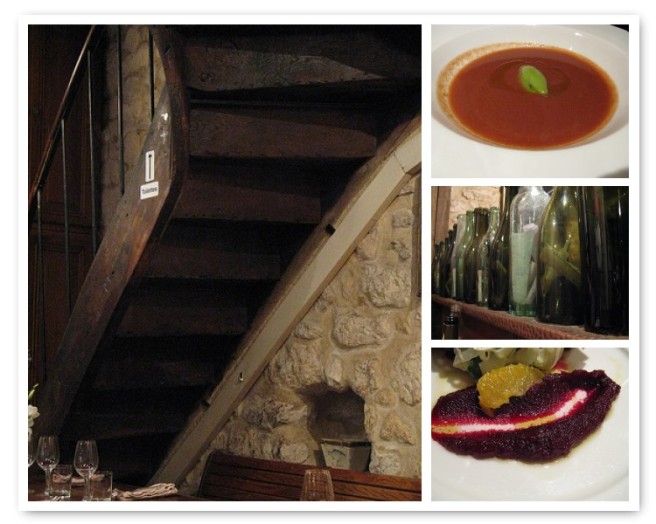 We ate gazpacho everywhere – it was the entree of the moment. The absolute best, though, was at Fish La Boissonerie, an unfortunately hip and crowded place in Saint Germain that was much further from our apartment than we had thought. I was thoroughly irritated by the restaurant, after being seated in a claustrophobic corner next to a small Taiwanese child with an inclination to stretch backwards into us, and a staff which spoke English but didn’t seem to care about actually talking to us, but I have to admit the food was wonderful. The gazpacho was very smooth, redolent with the flavor of ripe summer vegetables, and perfected by the addition of a scoop of basil ice cream. Jon had a really good piece of fish that was served with fennel, oranges and a beet puree, which was very successful as well.

If we were to go back to Fish, I would want to sit at the bar, preferably on a weekday. In the off-season, too, I think.

A little place called Bar de Jarente, on Place du Marché Sainte Catherine, provided one of our happiest dinners. We sat outside, squished in between an American couple and a pair from Spain. We eavesdropped on the Americans (talking about the local art community, mostly) and commiserated with our other neighbor when he received a pair of snail tongs and was completely flummoxed. The waiters were extremely casual, wearing peculiar t-shirts, low-slung jeans and crocs. I would normally think it wasn’t a good sign to be able to identify the brand of your waiter’s underwear, but the service was excellent despite the overexposure.

The food here was very simple, but well suited to the evening, and we had a really excellent bottle of wine. After bowls of gazpacho (of course), Jon had a nice steak smothered in shallots, and I had a large bowl of seasoned lentils adorned with smoky grilled sausages. Comfort food extraordinaire. I would go back here in a heartbeat.

I also enjoyed a small place we found hidden behind the Palais Royal, called Reflets de Scene. The waiter wasn’t nearly as nice to us as he was to his regulars, but the food was fresh and interesting. I started with a rabbit terrine served with pickled onions and cornichons, then had a dish of penne tossed in a slightly sweet glaze with plenty of wok-fried summer vegetables, herbs and pine nuts. Jon had a steak adorned with herbs, lots of caraway seeds and chopped walnuts. Very different flavors, but I liked all of it. I would love to be a regular here.

And then, of course, we had to go out for crêpes at least once. We decided to try Breizh Cafe on Rue Vieille du Temple, a very snug little place that smelled great as we walked up to it. We were lucky to arrive shortly after they opened, because it filled up fast. We ordered a pitcher of dry Breton hard cider, the perfect complement to Breton crêpes.

We both ordered galettes (buckwheat crêpes) off the specials list: andouille with onion confit and egg for me, and a Basque-style for Jon with red peppers, soft cheese and ham. I had honestly forgotten that French andouille is not at all the same thing as Cajun andouille, but I liked it a lot all the same. The rings of soft tripe were a lovely texture with the runny egg.

Finally, I have to mention our lunch at the Institut du Monde Arabe. We stopped into the cafe on the ground floor (not the incredibly expensive looking restaurant on the upper terrace) and split a schawarma platter. It was delicious: the lamb and chicken had been marinated, but then grilled and served plain with plenty of bread, the hummus was creamy and topped with a little pool of olive oil and several chickpeas, and the tabouli was primarily parsley, very fresh, with just a few flecks of tomato and bulgur.

We ordered arak to go with our lunch, which seemed to both shock and delight our waiter. It was brought to the table already mixed with water, instead of being served neat with a pitcher of water on the side, like pastis. It was very strong, and much drier than most pastis. Our lips were pleasantly numb for the next hour as we toured the museum.

So there are some of our more memorable meals in Paris. Not all, though…next week I’ll talk about our anniversary lunch at Taillevent, an event that requires an entire post to itself.