I’m a little late getting these photos up, due to no particularly good reason, but all my other food photos are piling up behind so I’d better get these posted! The most recent meeting of our supper club was centered around Peruvian food, with a few other South American influences creeping in. It was a much smaller group for this one, but we still ate very well. 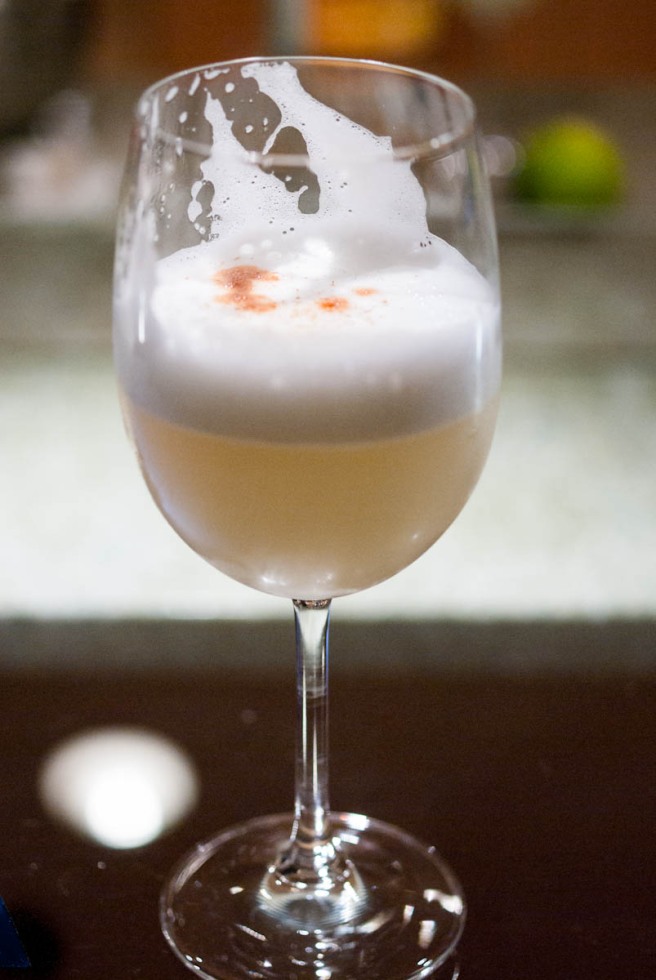 We started, of course, with Pisco Sours, made by Jon, mixed and shaken by hand. Thank goodness we remembered the existence of packaged pasteurized egg whites. We were lucky enough to find a really nice Pisco for this at an unexpectedly swell liquor store in Lynnwood, and they were perfect.

Once the cocktails were out of the way we sat down for our first course, tiradito by Linda. One plate was hamachi and the other was ahi, served raw and thinly sliced, each with a different roasted pepper sauce and side of vegetable salad. It was a beautiful fresh dish to start things off with.

Roger made causa rellena. I’ve never eaten this before so have no idea what it’s usually like, but this was delicious – spicy mashed potato layered with tuna, cream and avocado, with boiled egg and grape tomatoes on the side. The heat in the potatoes crept up gradually, until suddenly you were very glad of the avocado to cool things down. 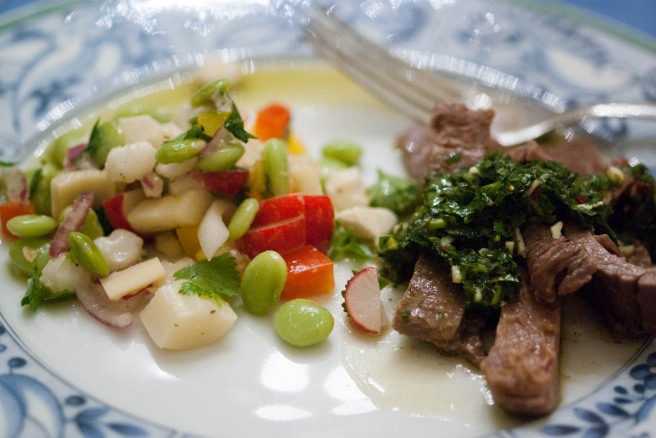 Our contribution to the main course was more Argentinian than Peruvian: broiled flank steak with chimichurri sauce. We bought the very thin-cut flank steak at a new Mexican grocery here in Mount Vernon with a fabulous carniceria. I rubbed it with salt, pepper, cumin and coriander and it cooked almost instantly under the broiler. The chimichurri was made as Francis Mallmann advises, roughly chopped with fresh parsley and oregano, with salt water, red wine vinegar, red pepper flakes and lots of garlic. Mike made the sarsa salad, which had limas, hominy, peppers, red onion, radishes, cilanto, mint, lemon, cotija, and hearts of palm (ingredient list swiped from Linda’s FB post about the dinner, otherwise I would have had no clue).

For dessert Mary made a wonderful tart of Pisco, coconut and lime, and served it with vanilla ice cream. It was generally agreed the dinner was a success.