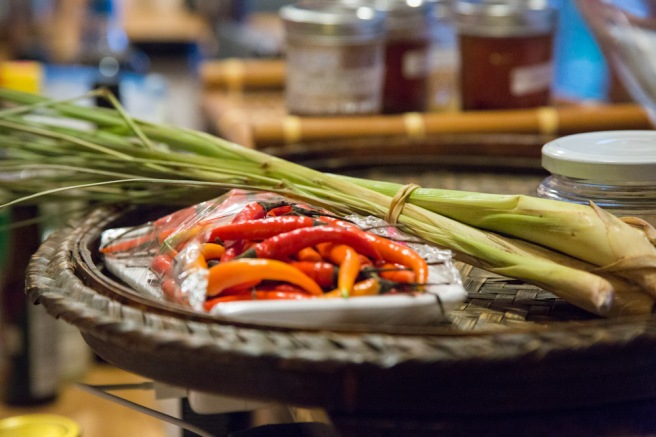 I recently acquired the Pok Pok cookbook by Andy Ricker, and have been incredibly excited about cooking from it, since Pok Pok is one of my favorite places to eat anywhere. Some friends of our felt the same way, so we got together a week or two ago and made a few things. I warmed up the weekend before by cooking dinner for some other friends, making the mushroom salad, a cucumber som tam, and an incredibly rich and spicy green curry with little eggplants and shrimp. Everything turned out remarkably well, so we had high hopes for our follow-up dinner. 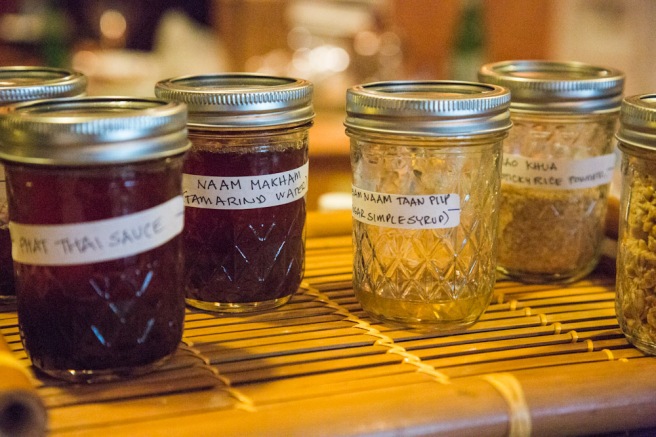 There was a fair amount of prep involved, including several shopping trips to Asian markets. Linda made a bunch of sauces and condiments in advance, ready for cooking. I only made one sauce, but showed up with a big tub of fragrant duck stock I’d made that morning. We mixed up our first batch of cocktails and got to work. 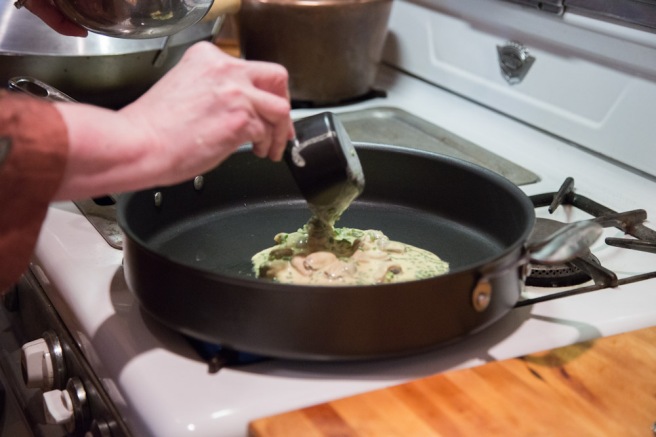 Because we had so many dishes, we ate in installments. We started with the broken mussel crepe, which I believe was the first thing I ever ate at Pok Pok. The recipe calls for banh xeo mix which I haven’t been able to find anywhere, but Linda cleverly bought some online.

She steamed the mussels (we were cooking in her kitchen on Whidbey Island, just a few miles from Penn Cove, so the mussels were fresh and amazing), shucked them and added them to the batter. 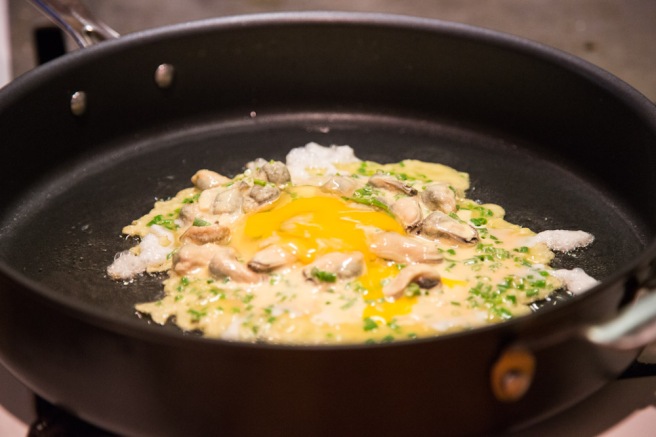 Once it’s spread out in the pan you crack an egg on top and smear it around. 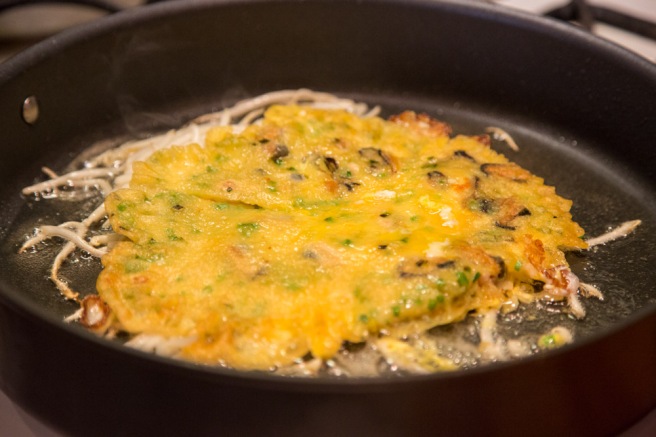 Then you put bean sprouts in the pan alongside and flip the pancake over onto them. 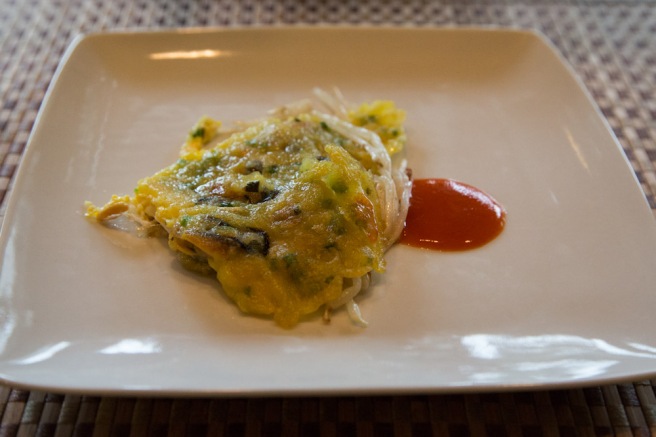 Then you whack the pancake into pieces with a spatula and serve. She made a double batch and cooked it in two installments – we weren’t sure if we were going to eat it all but it was so good we couldn’t help ourselves – I love the subtle note of coconut in the batter. The only condiment we used was Shark brand Thai sriracha, which was a happy surprise. 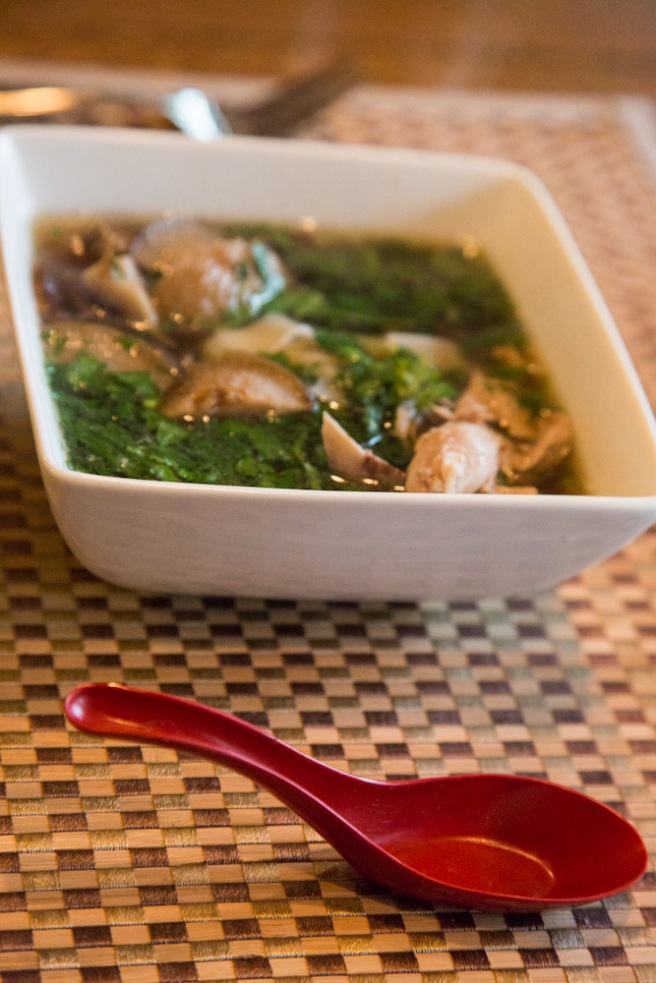 A little while later I made my dish, kuaytiaw pet tuun (stewed duck noodle soup). Like most of the noodle recipes in the cookbook, this is built in the bowl: first some cooked rice noodles, then shredded duck meat and quartered shiitake mushrooms (left over from making the broth), a good sprinkle of chopped cilantro and Chinese celery (I forgot to make fried garlic), and over all the rich duck-shiitake broth infused with ginger, lemongrass, sugar, star anise, pandan, celery, cinnamon, and bay. For additional seasoning we had fish sauce, vinegar-soaked chiles, toasted chile powder, and a sauce of Anaheim peppers pureed with vinegar, garlic and sugar. It was WONDERFUL. 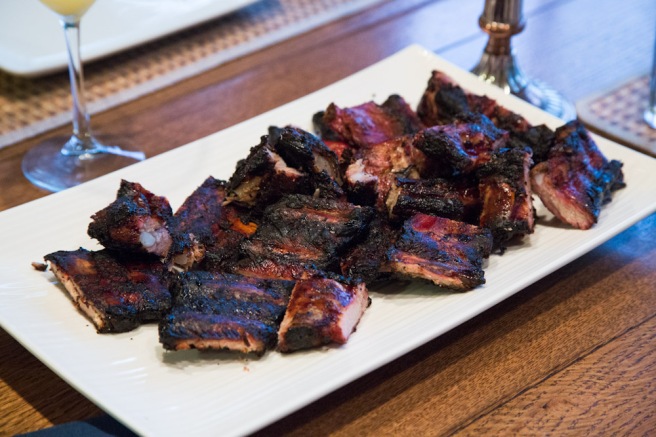 We finished up the evening with a few items off the grill: pork ribs and corn. The ribs were marinated and slow-grilled, then served with jaew, a fantastic dipping sauce. 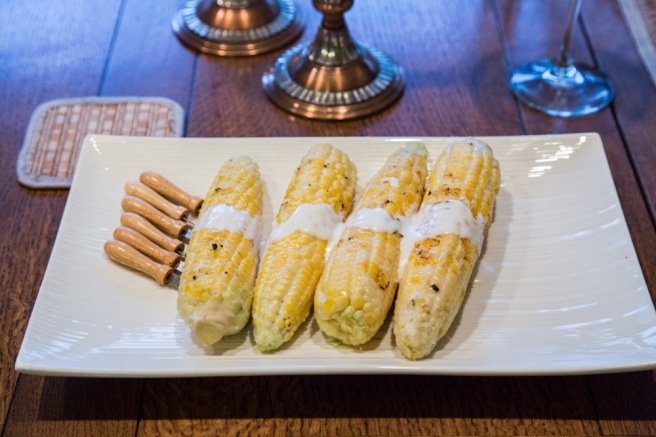 We ignored the instruction to boil the corn for ten minutes before grilling it, because that just seemed crazy, but we basted it with pandan-infused coconut cream. Either the pandan was too old (it was the last of the bunch in our freezer) or it didn’t infuse long enough, because the flavor was very subtle, but corn and coconut are a great combination. I also dabbed on some of the chile vinegar sauce that I made for the duck noodles. We’re all planning to do this again when real corn season comes around. We had planned on a few more dishes – Linda was going to make phat thai and I wanted to do the mushroom salad again, and there was supposed to be sticky rice – but we ran out of steam. Another time! 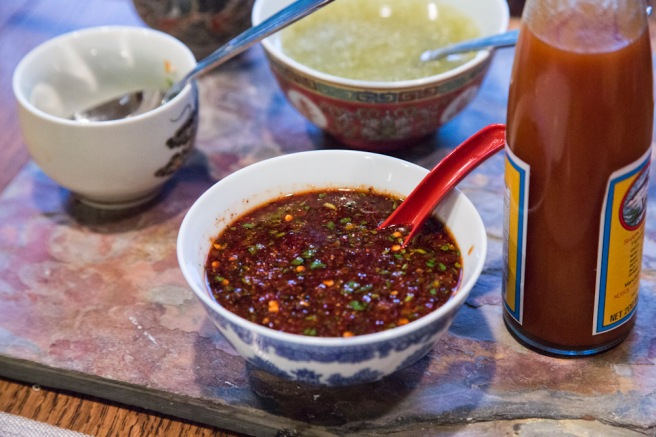 My only real complaint about the cookbook is that Ricker is very unforgiving about the specialty ingredients he calls for. He seems to feel that if you can’t make a dish exactly the way he says, you shouldn’t be trying to make it at all. I think that’s ridiculous, personally, and I have felt free to make substitutions and adjustments as seems necessary. And guess what, it’s all tasted great so far!

One thought on “Pok Pok at home”