Last summer I was working with a LOT of different contractors to get my folks’ new place fixed up, with varying degrees of success. The one that was most irritating was of course also the most expensive, and when I told them how annoyed I was on their customer survey they sent a rather nice apology note and two gift cards to Outback Steakhouse. We don’t generally go to chains like Outback, but hey! Free food! So last night after meeting with a tax advisor we rewarded ourselves with an outing into darkest Burlington, where the steakhouse is tucked into a hidden cul de sac between Target and the freeway.

I had done a little research on Chowhound on what our best bet might be (and what absolutely NOT to order), so after fighting off offers of a Blooming Onion, we settled on one Porterhouse steak to split, with blue cheese wedge salad for me and Caesar salad for Jon.

The steak was ostensibly 20 ounces but that includes bone, so it really wasn’t that big. It was cut quite thin but was done more or less to our specifications (although the waitress was careful to make sure we knew what “medium rare” meant so we wouldn’t freak out at the pink center.) It was tender and salty and quite edible.

The Caesar didn’t seem to be anything special – lots of garlic, little or no anchovy, dull croutons. No big surprises. 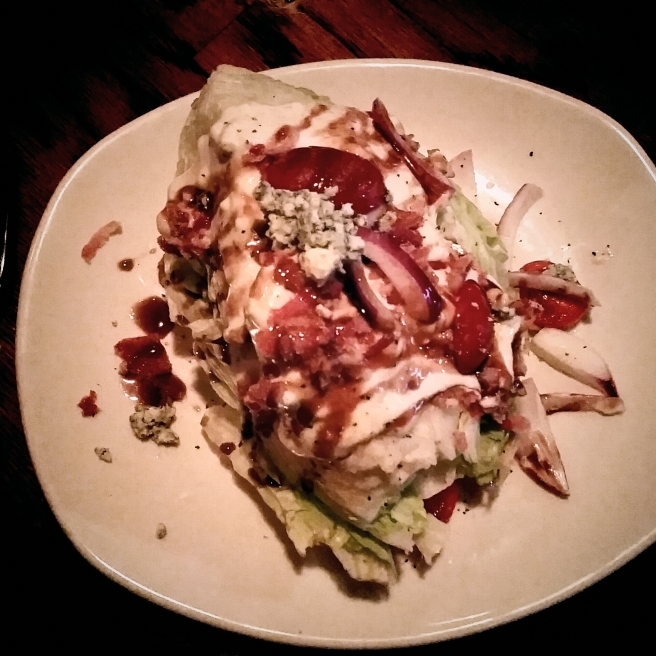 The wedge was quite fun, as I have a personal fondness for this sort of thing. The bacon was incredibly sweet, though, like candy. Between the dressing, tomatoes, raw onions and iceberg lettuce, it balanced out pretty well, but it was still a bit too sweet for my taste.

It all turned out to be plenty of food, plus two glasses of cheap wine, so we still have another gift card. We haven’t decided whether we’ll go back, and if so, what else would be safe to order. Any suggestions?

We don’t usually go to chain restaurants (although I’m well acquainted with the appeal of an Egg McMuffin), but a friend gave us a coupon to Anthony’s that needed to be used during March. I’d only been to an Anthony’s restaurant once, in Richland, and wasn’t thrilled by the experience, but we figured they’d at least have oysters and booze, and if we didn’t like it we could have dinner elsewhere. Much to our surprise, we had a great time.

END_OF_DOCUMENT_TOKEN_TO_BE_REPLACED

Photos and text by Jessamyn Tuttle, unless otherwise noted. Please do not reproduce without permission.
Loading Comments...
Comment
×