We have gone sort of gaga for blue cheese dressing ever since I learned how simple it was to make (I blame Hopworks in Portland for first really converting me to the idea, with their big delicious chunks of Rogue Blue). Last night’s dinner was our third meal using the steak from our anniversary (the second and fourth were sandwiches) – we just sliced the steak super thin and piled it on top of butter lettuce tossed with a buttermilk-white wine vinegar-stinky gorgonzola dressing. This time I got the quantity exactly right, and we heaped the salad into really big bowls and ate in front of the television. Perfect.

A simple dinner, just grilled steak and salad, but both parts were experiments. Jon tried a new method for the steaks, first cooking them with indirect heat until they reached 115°, then setting them over a very hot flame for a final sear, and I made an attempt at a blue cheese dressing that would go with both meat and greens. 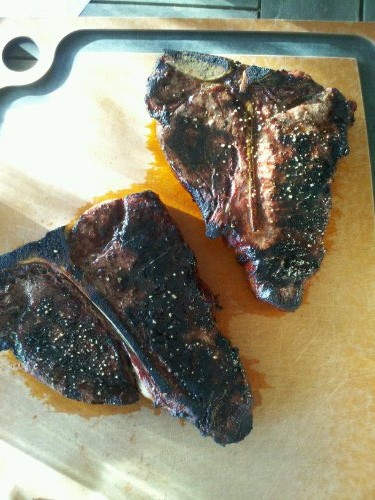 We had moderate success – the steak was a tad overdone, although far from inedible. It had a nice crust on it. The technique’s definitely worth revisiting, but with a little less actual flame during the final sear. 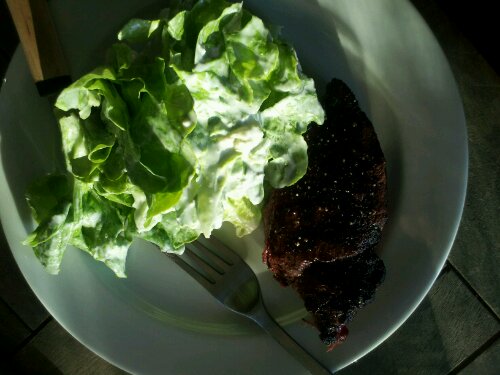 My dressing came out pretty great, in spite of not having buttermilk on hand – I mashed a nice soft and stinky gorgonzola with a splash of milk, some mayonnaise, a clove of garlic and some white wine vinegar. The only problem was that I went totally overboard with the quantity, so after eating nearly a whole head’s worth of fresh green lettuce (and the steak) we were rather gorgonzola’d out. I’ll do this again, but make maybe half as much. Or save some for leftovers.

We finally made it up to the Green Frog this week to see Charlie Hunter and Scott Amendola play. Ten particularly awesome things from the evening:

1. The way Charlie Hunter does something kick ass and mind blowing on the 7 string guitar (he does lead guitar and bass at the same time), then looks around at the audience grinning like “damn, was that cool or what?”

END_OF_DOCUMENT_TOKEN_TO_BE_REPLACED

I’ve been craving a cheese sandwich. Not a fancy one. A sandwich like the ones I used to get at the student union snack counter in college, on cheap white bread with cheap cheese and a few slices of tomato squashed in the middle, blazing hot from the grill. I didn’t eat white bread much when I was growing up, so cheese sandwiches of this sort had a real glamour for me (as did Lucky Charms cereal, I’m embarrassed to admit), and I only bought myself one once in a while, if I wanted a treat. Twenty years later, I’m finding myself craving that sandwich. Maybe I’m really just missing that experience, of being on my own for the first time and not having to ask anyone if I wanted to eat something bad for me. I certainly made up for a lot of childhood healthy eating in just a couple of years…maybe this is why I ended up in a Vegan-themed house my junior year. Anyway…

Unfortunately for my recent cravings, I couldn’t bring myself to actually buy a loaf of cheap white bread, as if the Junk Food Police would come by later that night. But I really wanted a cheese sandwich, so I circumvented my inhibitions by baking myself a loaf of suitable bread. It’s not bad for you if you made it from scratch, right?

One loaf, mostly white bread flour with just a little whole wheat, sweetened with honey and enriched with milk and egg. I baked it the evening before and let the loaf rest.  It sliced easily, and the crust was tender and perfect. It toasted nicely in the pan without needing a vast amount of butter, and held onto the melted cheddar in just the right gooey way.

It was a perfect cheese sandwich, with nothing but bread, medium cheddar, and butter. I didn’t have tomato for it, so I heated up some Pacific boxed tomato-red pepper soup to dunk into. It made me happy.

The new issue of Cascadia Weekly just came out today, with a restaurant review of Sunday brunch at the Brown Lantern, written by me. I particularly wanted to talk about their breakfast mac and cheese, which is a thing of beauty and great substance (read: calories). I had to refresh my memory before writing the article, of course, so we went back recently with some friends. I believe we were all slightly hungover, as befits this sort of breakfast, and it was incredibly satisfying. Here are a few extra photos from our outing:

The decor above the bar at the Brown Lantern is fascinating – always something to look at. I’d like to hear the story behind the inflatable shark.

The Lantern Standard breakfast. It really was too bad about the undercooked bacon, but the tater tots were excellent. I like tater tots. Almost as much as I like mac and cheese.

This was the biscuits and gravy. One of the ugliest platefuls I’ve ever seen, but it tasted great and there was plenty of gravy.

I barely made any visible dent in my breakfast. And yet I was very, very full. I’m still impressed after watching a member of our party eat an entire plate of this.

Anyone had the breakfast burrito there?

Let me tell you about this salad that chef Casey Schanen of Nell Thorn made at the cooking school the other night. Not that everything else he made wasn’t amazing, but the salad was the real eye-opener for me. Here’s what was in it: fresh arugula, roasted squash, arugula pesto, and warm ricotta cheese. Yeah.

I’ve been hearing a lot about making ricotta at home, but for whatever reason I’ve never tried it. It really is astoundingly easy, and as much as I love cold ricotta, it turns out I love fresh, warm ricotta even more. In this salad it fills the same role as fried goat cheese – the warm creaminess adds to the dressing and enriches the greens – but without the crunch (and oil). And ricotta has a fantastic springy texture in the mouth that I find addictive.

So Casey heated milk, stirred in salt and fresh lemon juice, and scooped out the curds into cheesecloth. I tossed the arugula with good olive oil and salt, and we portioned it onto plates with a sprinkle of roasted orange squash. A scoop of ricotta went on top of that, then a drizzle of garlicky arugula pesto with pumpkin seeds. That was it. I would eat salad more often if it was like this.

END_OF_DOCUMENT_TOKEN_TO_BE_REPLACED

For our end-of-summer party this year, we let ourselves be inspired by the latest issue of Saveur and made food with a Greek or Mediterranean slant: dolmades, tzatziki, tabouli, grilled flank steak, lemon chicken, grilled eggplant dip, hummus, and so on. For a while we were considering pastitsio (sort of a Greek lasagna), but decided on a greens-filled phyllo pie instead. I thought this would be spanakopita, the classic buttery spinach-feta pie, but then I discovered hortopita.

Hortopita is like spanakopita, but better. It uses any sort of greens mixture (horta in Greek) plus scallions and fragrant herbs, and instead of butter you brush the phyllo with olive oil, making it much less rich. I ended up making this twice this week – the one I made for the party disappeared almost instantly, and since there was phyllo left over I figured I’d just make us another one.

END_OF_DOCUMENT_TOKEN_TO_BE_REPLACED

at Powell’s a few weeks ago. Of course, I still haven’t made the recipe I bought the book for (the incredible homemade buttermilk crackers we had at Duckfest), partly because my eye was immediately drawn to the ricotta-stuffed muffin recipe. Our favorite goat cheese vendor had fresh ricotta last week, we just had to do it. Really, could you have resisted?

The muffin batter itself was a lot like my usual muffin recipe – yogurt and oil, not too sweet. The difference was the addition of ground toasted fennel seed into the batter, a fabulous idea in itself – plus a creamy center of ricotta mixed with a bit of sour cream, that spills out when you bite into the muffin. Mmmm.

END_OF_DOCUMENT_TOKEN_TO_BE_REPLACED

Ever since our last cooking class with Casey Schanen, I’ve been thinking fondly of his ravioli stuffed with fresh peas and feta, served in a lemon beurre blanc. We received a ravioli making kit for Christmas, and fresh shelling peas just appeared in the market. Our choice for Sunday dinner was clear.

For the filling, I wanted to use Gothberg Farms fresh chevre, because I am still newly in love with this cheese and I want to use it in everything. This particular ball of cheese had a distinctly grassy note entwined with its sweet milkiness. It seemed made to go with peas.

First, we shelled our peas. I blanched them in boiling water for two minutes, then drained and cooled them. I set aside a few peas to go on top of the ravioli, but mashed the rest lightly with a spoon before adding the goat cheese along with some salt and pepper. In retrospect, a little lemon zest would have been nice as well. And perhaps a little chopped fresh mint. Next time…

END_OF_DOCUMENT_TOKEN_TO_BE_REPLACED

Ever since I brought home a tub of leaf lard from Art of the Pie I’ve been itching to use some of it in a savory pie. My chance came this week, as we had a bunch of spinach from Frog’s Song Farm, a bag of mustard and kale greens from Blue Heron, and a wedge of fresh goat feta from Gothberg Farms. If that doesn’t say “savory tart” I don’t know what does.

I began by completely screwing up my pie dough. I usually stick with a part-whole wheat, all-butter crust for my quiches, but I wanted this crust to taste distinctly of lard. Unfortunately I added too much lard, especially given the warmth of the kitchen, and the dough became unwieldy. I ended up patting it into a tart pan with my fingers instead of rolling it out all the way. Then I prebaked it for a few minutes to make sure it would set and not just melt in the pan. It actually worked OK, so I got started on my filling.

I wanted this to really be about the greens and feta rather than the binder, so instead of following my usual quiche formula I made up something a little different. I blanched the greens in salted boiling water, then squeezed the liquid out and chopped them. I mixed up two eggs, then added the cooled greens, some sauteed shallot, the crumbled feta, a dollop of cream, lots of freshly ground black pepper, and a pinch of nutmeg. I piled all this into my tart crust and baked it for a while at 375° – sorry, I wasn’t really paying attention, but I think it was about half an hour. Basically, when the egg had set and was beginning to puff up, I called it done.

We let it cool briefly, then carefully (as the crust was very tender) cut wedges and ate them with glasses of chilled rosé. Despite the haphazardness of the preparation, it was really, really good. How about that?

Photos and text by Jessamyn Tuttle, unless otherwise noted. Please do not reproduce without permission.
Loading Comments...